↓ Skip to Main Content
Home › Yarns › You could tell a drowned man’s port of origin by the pattern on his Gansey.

You could tell a drowned man’s port of origin by the pattern on his Gansey. 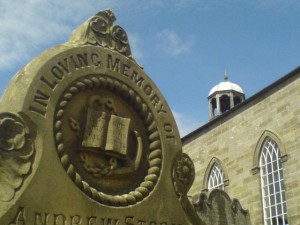 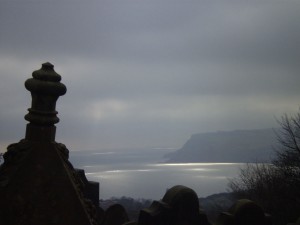 Most men washed overboard were considered to be buried at sea. It was hugely impractical to transport a corpse & no parish would want to stand the cost of burying a stranger. There are over 800 graves in the churchyard at Old St Stephen’s Church, in Robin Hoods Bay on the N. Yorkshire coast. Many of them commemorate mariners. Only 4 are ‘drowned & found’.

Queen Victoria never fancied a fisherman so unlike tartan, Ganseys never got the official treatment & design elements flowed back & forth like good tunes as fisher folk met, moved & married.
Imagine you’re a herring lassie from Arbroath; down in Whitby you catch the eye of a local lad. What pattern should you knit for his 1st Gansey? Speed-dating’s one thing – knitting your fiance his shroud is, as they say, a bit previous. 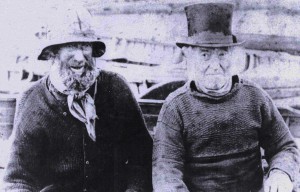 A Suffolk ferryman fancies a Gansey; his Cornish mate gets his wife to knit him one. Lads from rural Suffolk signing on as crew on fishing boats out of Yarmouth were known as Joskins & would have thought nothing of wearing their Ganseys back at home. A hundred years later photographs emerge. Is this evidence of a Suffolk Gansey tradition?

Having said that, a Scottish Gansey is different from a Yorkshire one. The Sheringham ones might have been knitted by the fairies, so fine were the needles. Hebridean Ganseys have one pattern on the yoke & another on the chest & back. Rope & Ladders, a classic Whitby pattern, was found in Katwijk, a Dutch fishing port. Some patterns crop up in more than one place. Broadly speaking it’s possible to identify a region by its Ganseys, but be warned; the chandlers’ shop Ganseys’ patterns weren’t necessarily traditional to the area in which they were bought. It’s one thing chasing a fisherman into a blind alley to get the pattern off his back but when looking at old photographs, beware of these red herrings.